I have decided to abandon this one :( 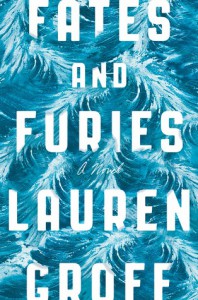 Not all books suit all readers and I have decided that this one is not for me. I was reading it for a book group, but as I have discovered that I am not going to be able to make the discussion, it is with some relief that I have decided not to continue. By my definition, an abandoned book gets only one star, so my apologies to Ms Groff, nothing personal.

So, what was it about this book that I didn't like?
I made it to 9% and in fact the first chapter started out reasonably well, with the newly-weds consummating their marriage on the beach - but already I'd decided I didn't like the author's comments slotted in by way of brackets. I've come across this technique before and it really turns me off a book.
Then the second chapter, Lotto's backstory, suddenly went really staccato in style, more of a series of notes than a novel, and this was where the book lost me. In addition there were a few questions raised, such as why didn't the headmaster question why Lotto was wandering round in the night (loc 450) and who was the 'he' referred to as sitting in on classes - Chollie or Lotto?

I'll be interested to hear the views of my book group but I'm moving on.